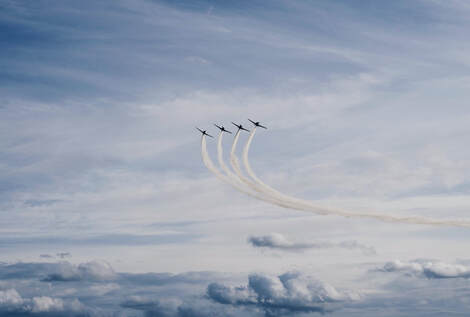 Singular vision aligns the entire armed forces of a nation. And distillation of vision is deep. From small teams of special forces to large armies at land, sea and air. Startups often go tangential to their vision. Founder distraction is a big overlooked reason for this drift. Founding teams should have unifying agreement on the vision and the details beneath. This will result in aligned teams as founders divide functional responsibilities among them.

Armed Forces and their families move into a new environment every couple of years. Complete change in reporting & teams, city, schools, community, weather and more. My upbringing was in twelve different states by the time high school finished. Packing, moving, adjusting were a defined process. Uncertainty is one big thing that every founder should embrace. The startup operating environment will keep changing. Creating a simple mental process can ensure startup growth as environment changes. Marry your vision, adapt to everything else.

Two principles from Armed Forces that can help increase the sum of parts while forming teams:

In the earlier startup era, capital and computing were scarce. In the current startup environment, talent and company-building is an issue. Armed Forces training imbibes strong management of people, materials and resources. Learning the art of jugaad creates solutions from minimal resources.


Our current and past environment has conditioned our minds. Opening our minds to diverse thoughts and practices builds perspective.

Armed Forces live without families when transferred to bases where families aren't allowed. Even if the base allows family, it may not be possible to uproot the kids' college education. Becoming a founder will present similar situations. Best to prepare your loved ones in advance and set the right expectations.

My wife, brother, sister-in-law, brother-in-law and I have an Armed Forces upbringing. This topic is dear to me. Please keep an eye for a series of notes on startups and the Armed Forces.​
Let's Talk: If you have a true experience that resonates, please send me an email.
#startup #founders #startupfounders #startupjourney #startupstories #startupsuccess #lessonslearnt #startupscale #armedforces #military #defense #defenseforces #specialforces #army #navy #airforce #bestpractices